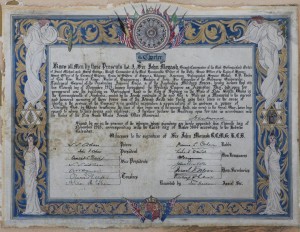 The Charter signed by General Sir John Monash GCMG KCB VD at the opening of the Jewish War Memorial Building in Darlinghurst, 11 November 1923.

The involvement of Jews in the Australian armed forces stretches back to the nineteenth century when each of the Australian States established volunteer rifle, cavalry and artillery corps. Some of these units fought in the New Zealand (Maori) War, the Sudan Campaign, the Boer War in South Africa and were involved in the suppression of the Boxer rebellion in China in 1900.

When Australia was faced with its first military challenge as a nation in the First World War, Jewish volunteering for armed service occurred at a rate considerably higher than the national average. Rabbis preached that it was

the duty of Jews to fight for their King and Country and the Jewish men, well aware of how good Australia had been to Jews, responded accordingly and the impact on the small Jewish community was enormous.

Some of their names became household words, such as General Sir John Monash (about whom British Field Marshall Montgomery said (“I would name Sir John Monash as the best general on the western front in Europe.”) and Private Leonard Keysor, who won the first Victoria Cross awarded after the Battle at Lone Pine on the Gallipoli Peninsula.

When the Second World War broke out in 1939, again Jews were at the forefront in enlisting and this time their motivation was also to fight against Nazism. 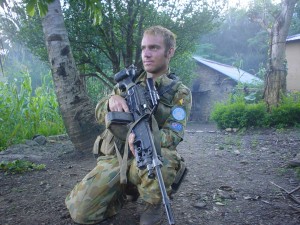 As recently as 2009 Private Greg Sher (Z”L), a member of the Special Forces Commandos,

was killed in action in Afghanistan.

Throughout Australian history, apart from isolated incidents of individual anti-Semitism, Jews were welcome in the Australian armed forces and by their distinguished service, helped dispel the anti-Semitic slur that Jews were shirkers and cowards and made bad soldiers.

Over and above the gratitude we all owe the members of the Australian Defence Forces, Australian Jews today owe a particular debt to the contribution our illustrious Jewish service men and women made to destroy that image.