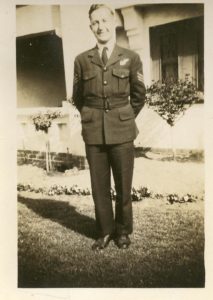 Maurice Green was the son of Israel and Bella Green and brother of Ette Bay, Lea Portrate OAM and Eleonore Solomon. Israel Green was a prominent leader of the Sydney Jewish community, after whom a large reception room at The Great Synagogue is named.

Maurice attended Sydney Grammar School and sat the Leaving Certificate in November 1940. He enlisted in the RAAF in 1943.

He was killed on 26 January 1944, when his aircraft crashed into the sea during night training exercises off Point Perpendicular near Nowra, NSW.

Israel Green was President of Sydney Legacy and on the children’s slide in the grounds of Legacy House in Moss Vale, there is a plaque which reads:

ERECTED TO THE MEMORY OF
F/SGT MAURICE ISAAC GREEN RAAF

(Information kindly provided by Rohan McAlpine and his daughter Grace, who live in Moss Vale very near Legacy House.)