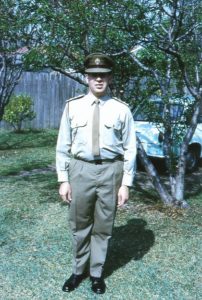 Captain Ian Isaacs was a surgeon who served in the Australian Army in Vietnam.

He grew up in Kingsgrove NSW, attending the local primary school and Opportunity School before completing his secondary education at Canterbury Boys High School and going on to study medicine at Sydney University. He was selected for National Service and after completing his junior and senior residency at Sydney Hospital, underwent basic training at the Puckapunyal Army Base and was then assigned to 21 Platoon and a three month officers course followed at Healesville, Victoria.

After 12 months army training in Australia, he left for service in Vietnam, where he rose from the rank of second Lieutenant to that of Captain. He was the medical officer to 1500 servicemen in Nui Dat in the province of Phuoctuy for 9 months and was then asked to be the Surgeon in Binh-Din in a civilian hospital for three months.

On his return to Sydney in October of 1971 he specialised in general surgery and then plastic surgery and subsequently went on to specialise in hand and microsurgery and was a Visiting Medical Officer at Sydney Hospital. He was the Director of the Hand Unit for five years and also the Chairperson of the Sydney Hospital Medical Staff Council.

In March of 2002 he was honoured with the Archie Telfer Prize, an award presented to staff who contribute to the academic reputation of the hospital and who demonstrate excellence in their chosen field.

In 2009, just before his passing, Ian was awarded the Sea Eagle – a limited and highly prestigious award. The dedication commended Dr Isaacs for excellence in hand and microsurgery.

Ian was married to Kerry Steinberg from Perth and they had two children, Tanya and Daniel.