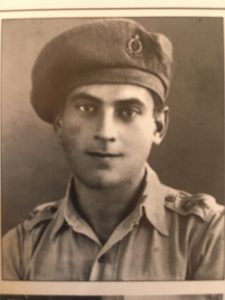 Isaak Frischer was born in 1911 in Beuczacz (Buchach), a town located in the Austro Hungarian Empire and grew up with his parents in Stettin, Germany. He commenced his medical studies in Berlin, however, as Jews were subject in universities to a quota system and were unable to practice medicine in Germany, he continued his studies in various universities in Europe. In 1933 he moved to Siena, Italy, completing his undergraduate studies in 1935 and later a post graduate degree.

Isaak married Jenny in March 1939 in Riga, Latvia. In June 1939 Jenny was lucky enough to leave Germany with her parents for Australia. There was no sponsorship for Isaak and he returned to Italy. He was arrested and interned in an open camp at Ferramonti in Calbria where he remained for 38 months. It was a camp for political dissidents and ethnic minorities and not a death camp or a slave camp. Between June 1940 and August 1943 over 3,800 Jews were imprisoned in Ferramonti, which was the largest of 15 camps established by Mussolini.

Isaak and a friend escaped by stealing a boat and travelled south to join the invading allied forces. He volunteered to join the British 8th Army as an interpreter, as he spoke fluent German, English and Italian, however, as a doctor his services were far better deployed in this capacity in the army. He served as a doctor with the rank of captain and was later transferred to the British Indian Army serving in Poona.

He was demobilized in Melbourne in about 1945/6 and joined up with his wife, whom he had not seen since 1939. As his medical degree was not accepted in Australia and in Melbourne he would have had to restudy all 6 years of medicine, he relocated to Sydney where he was only required to study for 3 years.

Isaak was employed by the NSW government as a school medical officer. In about 1952 he purchased a medical practice in Campsie and developed a large practice of Italian speaking families. He retired from private practice in 1971 and worked on a part time basis for various NSW government departments until he retired.

On 15 December 1972, Her Majesty the Queen, in recognition of loyal devoted services in the cause of humanity, admitted him to the Most Venerable Order of St John of Jerusalem.

Written by Fay Frischer, daughter of Isaak Frischer, who also provided the photograph