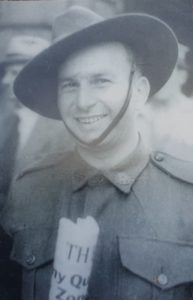 David Falk, the eldest son of Rabbi Leib Aisack Falk, was born in 1916 in Plymouth, England and came to Sydney when Rabbi Falk was appointed to The Great Synagogue in 1922, later receiving his rabbinical qualification in Palestine in 1936.

He was sent to the Northern Territory initially for training and joined an artillery unit where his fellow soldiers were mainly a tough group of Queensland cane-cutters.

During WWII David served in the AIF and was an anti-aircraft gunner in New Guinea fighting the Japanese on the Kokoda Track. 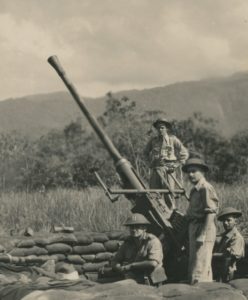 Japanese attacks on the Australians in New Guinea were common and in the Sydney Jewish Museum there is a display of one of David’s army training books, with bullet holes caused by a Japanese attack on his tent encampment at night when David narrowly escaped death.

David was a staff sergeant and was also appointed a medical officer. Before the war he had started to study medicine at Sydney University.

During his time in New Guinea, David was a leading figure in the establishment of the Milne Bay “hut” Synagogue where Jewish servicemen serving in the region from Australia and USA, came together for special services during the war.

In his book ‘Jewish Anzacs‘, Mark Dapin, quotes an observer speaking of ‘the earnest , reverent and able leadership that was being rendered as Chazan by Rabbi Falk’s son, Gunner David Falk’. 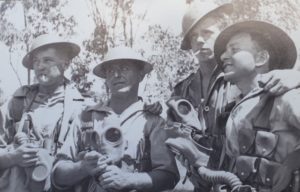 After the war David had a successful timber and veneer business. He had many customers who were holocaust survivors highly skilled in cabinet-making and who had arrived from Europe. They made high quality furniture with the veneers he sold. As a child, his son Michael remembers sometimes visiting with his father their factories and workshops all around Sydney.

David died prematurely at 47 in 1963 leaving his widow Jean and two sons Jonathan and Michael. 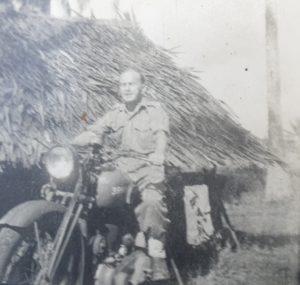 David Falk on a motorbike outside a native hut in PNG