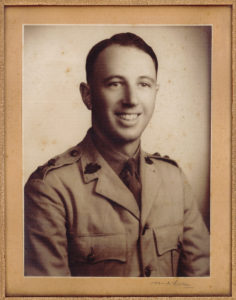 Orwell Phillips was born in 1913 at Tusculum, Potts Point, and educated at Sydney Grammar School and Balliol College, Oxford. He returned to Australia in 1934 to study architecture at Sydney Technical College while employed as a draughtsman at the architectural firm Rudder and Grout.

Orwell joined the Militia in 1938 and attended parades at the Mosman Drill Hall. In 1939 he was called up for full time duty in the anti-aircraft artillery, interrupting his architecture studies. He trained at the School of Artillery at North Head, rising to the rank of Sergeant and in turn training new recruits. In 1940 he volunteered for a unit being formed for service in Darwin, and arrived there in December as a Lieutenant in the 14th Anti-Aircraft Battery. In 1941 he was appointed as Gun Position Officer in charge of a section of four of the recently installed 3.7” anti-aircraft guns at the Oval.

The bombing of Pearl Harbour in December 1941 led to heightened awareness of the possibility of an air attack on Darwin. American and Australian military aircraft based at Darwin were instructed to signal to the air defences on approach so that they could be recognised as friendly. On one occasion, however, an incoming aircraft at dusk failed to display its signal lights, and Orwell ordered one of his guns to fire a warning shot well clear of the aircraft. This resulted in some terse exchanges between the services – and a perceptible improvement in aircraft signalling to the guns on approach.

Orwell was involved in action during the bombing of Darwin on 19 February 1942 by aircraft of the Imperial Japanese Navy, and during a number of subsequent bombing raids. Later in 1942 he returned to Sydney to undertake a course at the School of Artillery in Randwick, and on its successful completion he was appointed as an instructor there, enlisting in the AIF with the rank of Captain. In 1945 he was in the course of being posted to an anti-aircraft unit in Borneo when the war ended just as he reached Brisbane. After he had spent several weeks in camp there, his former employers Rudder and Grout successfully applied for his release, and he was discharged from the Army in October 1945.

Orwell became a registered architect in 1945, and rejoined Rudder and Grout as an Assistant Architect. In 1948, a year after his marriage to Vanda Hertzberg, he established his own architectural practice, and designed a number of industrial buildings for Marrickville Holdings, offices for the United Insurance Company and hotels for Tooth and Company. He was one of the first architects in Sydney to become interested in the conservation of historic buildings, and worked on a number of these including Throsby Park and Throsby Barn, Moss Vale, the Surveyor General Inn at Berrima and St Bartholomew’s Church, Prospect. He was a founding member of the National Trust (NSW) and an early member of the Historic Buildings Committee of the NSW Chapter of the Royal Australian Institute of Architects, on which he served for many years. He was appointed a Fellow of the Institute of Architects in 1956, and a Fellow of the Royal Society of Arts in 1981.

Orwell Phillips had a long association with the Great Synagogue, Sydney. His grandfather, Louis Phillips, had been the Treasurer of the Building Committee for the Synagogue in the 1870s, and afterwards one of the first Presidents of its Board of Management. Orwell joined the Great Synagogue Board after the death of his father, also Orwell Phillips, in 1957, and followed in the footsteps of both his father and grandfather when he became President in 1982. He was made a Life Member of the Board in 1987.

Orwell was appointed Honorary Architect for the Great Synagogue shortly after his own practice was established, taking up the position previously held by his uncle by marriage, Gordon Keesing. In the 1950s he designed the War Memorial (now Israel Green) auditorium underneath the Synagogue, and in the 1980s was architect in association for the Education Centre in Castlereagh Street. Orwell was also responsible for a number of major conservation projects carried out at the Synagogue, including stonework repairs to the Elizabeth Street façade.

When Tusculum was chosen as the new headquarters of the NSW Chapter of the Institute of Architects, Orwell’s memories of his first home, and the photographs taken with his Brownie box camera before his family left the house in 1928, were invaluable in the conservation of the interiors. He celebrated his 80th birthday with a family lunch in his childhood home. Orwell died in 1997, just a few days before his golden wedding anniversary.