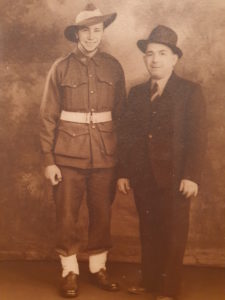 Morry Goldberg during WW2 with his father, Sam Goldberg

His basic training was in Cowra, NSW and on 5 August, having only been there a very short time, he witnessed the infamous ‘Cowra Breakout’ by the Japanese prisoners-of-war held there.

He was part of the escapee round-up, with 231 prisoners being killed, either committing hari-kari or killed by their own. Four of the Australian soldiers lost their lives in the course their duty.

Morry remembered this event as being very traumatic and unpleasant, having to bury the Japanese escapees twenty to a trench, in blankets supplied by the Red Cross.

In April 1945 the 2/48th Battalion was committed to its final deployment of the war to the South West Pacific Theatre – Morotai Island, with American troops, in order to take part in the landing on Tarakan in Borneo as part of Operation Oboe.

During the next few months, the battalion was involved in significant engagements which took place in the mountain ranges surrounding Tarakan town – capturing many features in the area.

They experienced their heaviest losses of the campaign during three assaults up the steep slopes of “Sykes” feature towards Tarakan Hill with 6 killed and 26 wounded.

In early June, major combat operations on the island ceased and the Australians began the mopping up phase of the campaign. Following the end of hostilities in August, the battalion remained on the island to undertake garrison duties.

When the war was declared over, Morry did not hear the news immediately, as he had been on patrol. However, on his return to camp, word filtered through and he felt a huge sense of relief that it was over and his thoughts were only to get home.

Everyone was celebrating, but one over-enthusiastic soldier thought he would fire a few shots – and one only missed Morry’s head by about 30 cms as he decided to stand up from his bed. Morry understood the man’s happiness, but decided it was necessary to have a ‘quiet word’ with him, as he did not appreciate being shot at, especially as the war was over and he was only 19 !

He was a Life Member of the Returned and Services League of Australia and a member of Homebush/Strathfield RSL Sub Branch for 26 years and Sub Branch Treasurer for 15 years.

He was also Auditor for the Western Metropolitan District Council of the NSW Branch of the RSL for 12 years and a Member of the Burwood Council Sandakan Education Committee.

Eulogy given at Morry Goldberg’s funeral