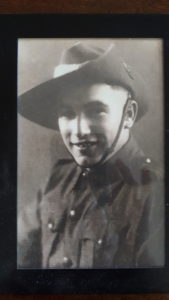 Philip Goldman joined the AIF early in 1940, enlisting with the 2/5 Field Artillery Regiment – Seventh Division. In October the regiment sailed on the ‘Queen Mary‘, with 7,000 troops on board, and disembarked in Bombay. After a period of training in the hills at Poona, they were transported to the Middle East, travelling by train across the Sinai Desert, through Gaza to Deir Suneid, which was to be their camp for several months.

On leave in Jerusalem, as he had been foundation secretary of the NSW Friends of the Hebrew University, he enjoyed visiting Mt. Scopus. Later the regiment moved by train to Egypt, and trained in desert warfare before receiving orders to return to Palestine and prepare for the Syrian campaign. In northern Lebanon they supported the infantry as the battle began at Merdjayoun. 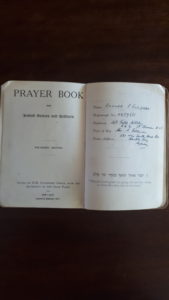 In January 1942 the regiment was recalled to fight the Japanese in New Guinea. The sand and heat of desert fighting gave way to the mud, rain, mosquitoes (necessitating daily doses of quinine to combat malaria) and falling coconuts, of Milne Bay. The Federal Election was in June 1943 and Philip Goldman was appointed the Returning Officer. He had commenced his legal practice in Sydney in 1937 and was asked to appear as defence counsel on a number of courts martial.

Whilst on home leave for 7 days, Philip Goldman married Ailsa Browne at The Great Synagogue in November 1943.

In 1944 he applied to join the Army Legal Corps, but instead was appointed Legal Officer to the Legal Service Bureau, providing legal aid to servicemen and women. He joined Legacy in 1945 and was active on welfare and legal committees for 25 years. As Honorary Solicitor for the RSL and the War Widows Guild he continued his connection with the Services for many years. 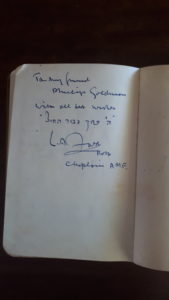 Inscription by Rabbi L A Falk

Photographs and information on Philip Goldman were provided Sarah Goldman and Suzie Silbert.