Harry Temple was one of the early volunteers in the 2nd AIF and enlisted on 24 May 1940. He was appointed to the 2/5 Field Regiment which was an artillery unit. The recruits were sent to Ingleburn Army Camp, where there was little equipment available and the days were spent marching in muddy paddocks, playing sports, “smokos”, blanket folding and other routines. There were no uniforms available. Australia was not prepared for a large-scale war.

As the war progressed, there was an urgent need to prepare the army for overseas service. In September 1940 the unit was sent to Bathurst for more intensive training. There was a shortage of transport and some of the soldiers had to cling to the platforms of the commercial trucks. Some weapons were now available and the time was spent polishing and oiling their guns.

On 19 October the unit departed Bathurst with cheering crowds farewelling them along the way. Many of the soldiers were sporting hangovers from the previous night’s celebrations.

With the realisation that they would be soon embarking overseas, Harry Temple became engaged to Rae Cohen, but they postponed the wedding until his hopeful return. Seven thousand troops boarded the Queen Mary which had been converted into a troop carrier. Once again there were cheering crowds and flotillas of small ships to farewell the troops off to the war.

This was not luxurious travel. Blackouts were enforced and the heat was stifling through the tropics. Their destination was a secret, although lectures in Hinduism suggested they were off to India. Time was spent with inter-regiment sports competitions and much gambling.

On 2 November they landed in Bombay (now Mumbai) and were then transferred to another ship and sailed through the Suez Canal. Palestine was their destination. Disembarkation was at the Egyptian port of El Kantara. In open rail box cars they travelled through a dust storm to Deir Suneid between Gaza and Jerusalem where they camped in tents.

The next few months were filled with mindless marching, but generous leave allowed the soldiers to let off steam in Cairo and Jerusalem. There was plenty of fresh fruit and vegetables, but the biggest problem was stopping their limited equipment from being stolen.

At last, some equipment was delivered. These were antiquated WWI howitzers. Rain, it was winter, followed by blinding dust storms were their only enemy. The men were craving for action but there was such a shortage of equipment.

In May they were moved to a camp near Nazareth, where the scenery was lush with fields and trees. The kibbutzniks made them very welcome with food, hospitality and entertainment. Thirty years later Harry returned to this area and carried fond memories of his stay.

On 7 June the regiment moved to Syria which was occupied by French Vichy. The action lasted six weeks when the enemy called for an armistice. There were a number of fatalities and casualties. Here the regiment’s highly regarded leader, (Roden Cutler, later knighted and NSW Governor) was wounded and his leg was amputated. The unit now controlled the demilitarisation zone around Tripoli.

As Singapore had fallen, the real threat was now assessed as the Japanese and the fear of their invasion of Australia. So the unit moved back to Egypt and in February 1942 they embarked for Australia. The return to Sydney enabled Harry and Rae’s wedding at The Great Synagogue to take place on 17 March. The records show he went AWOL at this time.

Their next destination was Milne Bay in New Guinea. Now confronted with topical rains it was quite a different war front. The Japanese invaded Milne Bay from the sea, but fortunately the land troops were supported by the RAAF and the enemy withdrew. This action was a great morale booster, being the first major defeat of the Japanese. Like many others Harry contracted malaria in New Guinea and so was sent back to Australia to recover.

His wife joined him in Warwick in June 1944. Here Harry incurred his only war injury. Sitting on the sidelines of a football match the ball was kicked towards him. The players bounded towards him, fell on his leg and broke his leg. He was now deemed unfit for active service. He was retrained as a dental assistant in the 55th Australian Dental Unit. He was discharged from the army on 6 September 1945.

Every Anzac Day Harry marched and met up at his unit’s re-union. He also attended NAJEX meetings. He was affectionately nicknamed Monte, by his army mates, which may have derived from ‘Monte Carlo’, as he was one of the organisers for two-up and other gambling pursuits in his unit.

Harry Temple was a modest man, a loving husband and father to his five children and a keen supporter of the community. He spent a major part of his working life working in the dry-cleaning industry. He passed away too early at sixty-four. As a touching tribute his army mates lined up outside the Chevra Kadisha.

His brother and sister-in-law in the wedding photograph both served in army administration.

Written by Harry Temple’s son, John Temple, who also provided the photographs. (He notes that Harry never spoke about the war and this information was largely gleaned from secondary reports.) 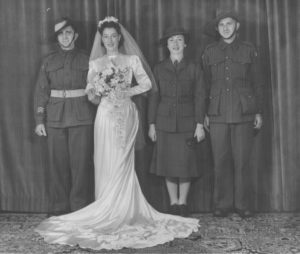