Herbert Gruenewald was born in 1915 in Rheinböllen, Germany and died in 2006 in Sydney, Australia.

The following was written by him and forms a small part of his memoirs that he wrote by hand and spans more than 50 foolscap pages.

‘ War broke out in September 1939, I together with some friends joined up with the South African Defence Force in the 6th Supply Company. Our Sergeant Major and also some sergeants were Jewish and I knew them from my private life. We were all volunteers. 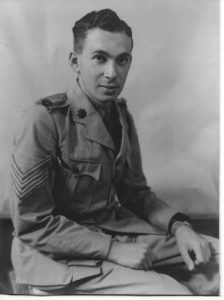 At that time we had to report in full uniform for drill and exercises one evening per week to Defence Headquarters. In March 1940 I was notified that our unit had to report to the continuous training camp in Premier Mine for 30 days. This was compulsory and I had to get leave from my employer, Ackermans, a retail department store. Those days were tough and strenuous under permanent force instructors who really made soldiers out of us. I came home to my hotel on the 17th May and on the 21st May, I received notification that “the government has called out the unit to which you belong and you are required to proceed in marching order to Premier Mine on 25th May1940”. As a result the following day Doris Schaverien and I got married. 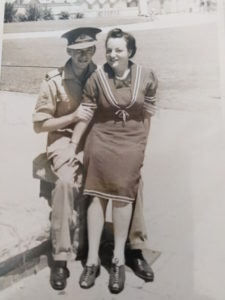 Many more weeks of training followed. I was given a job in the camp’s Orderly Room and apparently I did the job well so was promoted to Corporal. Later I was transferred to the camp’s Quartermaster Store as Sergeant where I gained many privileges. An important one was that you ate in the Sergeant’s Mess and drank in a private bar.

For a time there was some confusion when the army authorities discovered that many of us, including myself, were not South African citizens and we were speaking German! When the first division was formed and sent north, we who were not naturalized were left in camp. So a whole bunch of ex-German Jews were once again together and formed lasting friendships.

In 1940 more units were formed. I became Company Quartermaster with the rank of Staff Sergeant. Our company moved to the north of South Africa, being a supply company of ammunition, petrol etc for the unit stationed on the border. I personally was responsible for feeding and clothing the troops, keeping records of all motor transport and keeping records of arms and ammunition, while being responsible to the Officer Commanding.

In 1942 we were part of a South African Brigade that went in a convoy of ships to the north of Madagascar. We were accompanied by British warships. We landed in the formerly French naval base of Diego Suarez. It was expected that the Japanese wanted to occupy that base as a foothold there and therefore would be able to attack all shipping to the north. At that time, the German submarines were very active in those waters off Africa and sank many ships. They also wanted a base on Madagascar. South Africa and British forces got there first and occupied the vital northern part of Madagascar. Madagascar was a French colony but after the fall of France, the local commander or governor was a sympathizer with the “Vichy” French and in favour of Germany. That is why it became so important that Madagascar did not fall into the hands of the Japanese or Germans. It is a very poor country – the French as a colonial power lived very well but the locals had nothing!

We were housed in tents about 10 kilometres from the town and port. Our and the British troops’ supplies came off British ships and as we were a supply company, our men helped at the port.

My return trip home was on the New Amsterdam – in peacetime it was the newest ocean liner but of course, now it was a troopship. It was a dangerous journey as German submarines were sinking many ships around the Mozambique Channel. The South African Prime Minister General Smuts met us on 27th July 1945 on arrival in Durban.

Altogether I was in fulltime service for 5 years and 2 months. The same week that I was discharged, ironically my promotion to W.O 2 Warrant Officer was published by war records retrospective to 3 months before my discharge.

All members of Ackermans staff who volunteered in the Defence Forces were promised re-instatement in their same jobs and they made up the difference in pay to what the Army was paying. ‘

(This is the end of the excerpt written by Herbert Gruenewald.)

Herbert rose up through the ranks of the staff at Ackermans Department Store and retired with the title of Regional Manager of the Cape Province after many years of exemplary service in the retail industry.

He and Doris migrated to Australia in 1986, thereby uniting his family which now included five precious grandchildren. They were happily married for 62 ½ years.