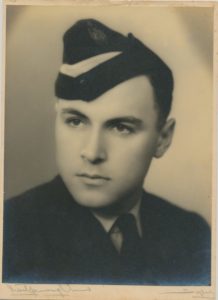 Owen Ash Weingott was the only son of factory manager Abraham Weingott and his wife Zara Hannah (nee Davis), both of Mosman, Sydney. The day after his 13th birthday, Owen had his Bar Mitzvah at The Great Synagogue in Castlereagh Street, Sydney. He went on to become one of Australia’s most successful and sought-after actors for roles in theatrical productions, while his voice was familiar to all radio listeners and for his many unforgettable appearances in major television dramas and serials and several TV commercials. This was the 50’s, 60’s, 70’s & 80’s. He began his career as an actor in amateur theatre from the age of 15, studying and performing at Sydney’s Independent Theatre.

After matriculating from Sydney Boy’s High School in 1939, Owen studied economics at Sydney University. This was cut short when in April 1942 he enlisted in the Royal Australian Air Force. At the end of the war he returned by sea to Australia from Canada in December 1945, where he had been instructing in aircraft identification, and was discharged with the rank of corporal.

He then studied for a year at the Sydney University Law School, but the lure of the ‘grease paint’ was too strong. Returning to the stage Owen was much in demand for roles as both hero and the villain. Soon he began taking fencing lessons from Frank Stuart at the Swords Club. Impressed with his talent Mr. Stuart promoted Owen to senior instructor and fight choreographer.  Owen was to arrange in excess of 400 duels in his career as an actor and fight choreographer. 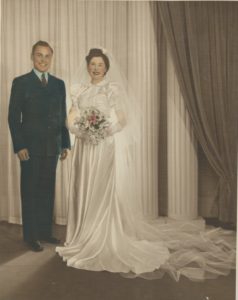 Owen Weingott at his wedding to Violet Margaret Dent