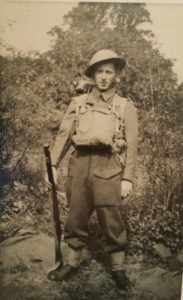 Ben Shaw served in the Royal Corps of Signals (UK), SE Asia Command in a secret group innocuously named Special Liaison Unit (SLU). In fact it was the Code and Cypher Section devoted to breaking Japanese signal codes and deciphering coded Japanese radio messages. This unit deciphered a Japanese signal referring to Admiral Yamamoto’s flight to Rabaul and with great relish, the US Air Force shot down the plane carrying the architect of the attack on Pearl Harbour. (For years the Americans claimed that it was they who had deciphered the signal, but many years later they admitted that it was the British.)

Ben’s unit also delivered the code word “BLUELIGHT” to Mountbatten’s Headquarters on 6 Aug 1945 (not knowing what it meant at the time). This was the advice of the dropping of the atomic bomb.

Ben Shaw enlisted as a private in the Yorkshire and Lancashire Regiment on 30 May 1940 at the age 20. His service no was 4753518. His group was laid up in South Africa on its way to Singapore, when the Japanese captured that fortress and so they were diverted to the India, Burma and Ceylon campaign.

On his discharge in June 1946, Ben was a Sergeant with the Royal Corp of Signals, Operator Cypher High Grade, on Japanese Intelligence. For his service he was awarded the India Star, the Burma Star, the 1939-45 Star and the Defence Medal.

Ben loved the warm weather of his overseas service and promised himself that if he survived the war, he would migrate to a warm climate. South Africa was preferred, as he had made many Jewish friends there. However on returning to Leeds, he met Edna Reece, whom he married. She had cousins in Sydney who agreed to sponsor them and so they left for Australia. On arrival a tailor offered Ben a job and indeed Ben is buried next to that man at Rookwood War Memorial Cemetery.

The Shaws, with their son Ray, then 11 months old, were one of the first group of post-war UK migrants to Australia, arriving in early February 1949. (They were not ‘£10 Poms’. Their passage was free provided they stayed 2 years. The ‘£10 Pom’ scheme came shortly thereafter.)

At the time they departed the UK, citizens who migrated automatically became Australian citizens, so when the ship entered Australian waters, the Captain congratulated them all. Unfortunately, unbeknown to the Captain, while at sea Australian law changed in this regard. It was only during the time of the Whitlam government, when the PM made certain announcements about only Australian citizens being eligible to vote, that the Shaws checked and discovered that they were not in fact Ozzies. So they had to apply for Australian citizenship and go through the ceremony for that.

On arrival the Shaws were not well off financially and so both worked and when their son was old enough he went to day-care. They lived in Woollahra and in order to save money, Ben would walk to and from the Fire Brigade in the city where he worked as a tailor. However he could not put up with the slow pace there and his own productivity was so high that the manager asked him to slow down. He decided he wanted to be his own boss, so he started door-to-door selling of clothing and other items in the countryside. He travelled as far south as Moruya and north to Scone. He also travelled to Engadine and Heathcote (now part of Sydney, but then they were country towns).

When age, credit cards and the major stores made this business more challenging, he opened a haberdashery, clothing and wool shop in Surry Hills, where he and Edna worked until their retirement. They then devoted their time to helping others and both won a number of awards and honors for their work in this area.

Both were keen supporters of NAJEX from their arrival, including being on its committees and active in fundraising, memorial ceremonies and commemorative marches. Ben was also Vice-President. They were also committed to other groups on a voluntary basis including St Vincents Hospital, Coogee Synagogue, and a number of Jewish welfare groups.