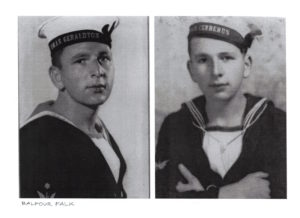 Balfour Amiel Falk was born in Sydney on 18 October 1922. He was the third son of Rabbi Leib and Fanny Falk. His two brothers were David and Gerald, and he had a younger sister, Nina. He was named after Lord Balfour, who brought about the Balfour Declaration in Palestine.

Balfour grew up in Centennial Park. He was educated at Paddington School and Cleveland High School. His father, who was the Chief Minister at The Great Synagogue, was very well known and respected in the community. He was a great influence on Balfour, as was his mother, who was a kind and hospitable person.

In 1940, at the age of 18, Balfour enlisted in the Royal Australian Navy as a telegraphist. His wide range of active service included Tobruk, Malta, Singapore, the Dutch East Indies, the Persian Gulf, and India. He was twice wounded by bomb blasts, and had typhoid fever. He suffered from shell shock from one of the blasts for over a year. 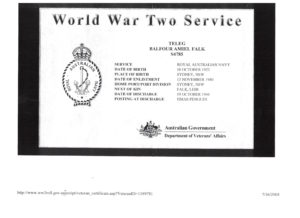 He returned to Sydney in 1945, and continued as a telegraphist for a few more years, sometimes travelling overseas. He settled down and attended Sydney Technical College and studied Electrical Engineering. Later, he studied Lighting Engineering and worked in that area as a consultant.

Balfour met Gina Cohen in Sydney, and they were married at The Great Synagogue by his father, in December 1954. They lived in Centennial Park, and Simon was born in December 1955. In 1957, the family moved to new home in Turramurra. Leona was born in August 1958.

Balfour continued his profession as a Lighting Consultant for many years until his retirement. He then took up ham radio, communicating with others around the world. He had many hobbies, such as swimming, woodwork, metalwork, lapidary and gardening, and was always fixing appliances. He also had a great love of animals, including tropical fish.

Balfour was greatly influenced by his parents, and continued their adherence to Judaism. Balfour and Gina were founding members of The North Shore Synagogue and attended shule each week. Even when he was ill, Balfour made the effort to be at the Shabbat service.

Balfour enjoyed the company of his five grandsons, Daniel, Adam and Aron in Sydney, and Joshua and Zachary in Coral Springs, Florida.

Sadly, Gina passed away in December 1998. Balfour continued to live in Turramurra until November 2006, when he was among the first residents to move into the Montefiore Home at Randwick.