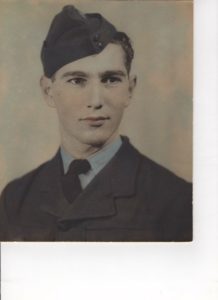 Born at home on 28th January 1926 in Newland Street, Bondi Junction, Basil was the first born son of Isadore and Celia Don, both emigrants from England.

Basil joined the Air Training Corp when he was 16 years of age and was drafted into the RAAF at 18 years of age. He was then sent to Point Cook Flying School, after which he was sent to Cooktown Qld for jungle training.

At the age of 19 he departed Townsville for Borneo and was at the invasion of the Island of Morotai, now know as Sulawesi, part of Indonesia in the Celebes, part of the Dutch East Indies.

Landing in Balikpapan, he was met by the Salvation Army and was very thankful that they were awaiting on the beach head with hot cocoa and Anzac biscuits, whilst bullets were flying everywhere.

On arrival at Morotai, he was attached to RAAF 1 TAF (1st Tactical Air Force). There he was allocated a tent and was surprised to discover he was sharing it with Wesley Browne (many years later to become NAJEX president), whom he had known from his teenage scouting years.  During this time he contracted malaria.

On return to Australia, Basil studied accountancy and worked for for Mastercraft Chocolates and then Unilever, where he worked for 40 years becoming the Chief Accountant in charge of Superannuation for Australia and New Zealand.

Basil Married, Thelma Woolf at the Great Synagogue, Sydney in 1948. They had a son, Mark and a grandson, Gabe.

NAJEX was a significant part of Basil Don’s life and he was its Treasurer for many years.