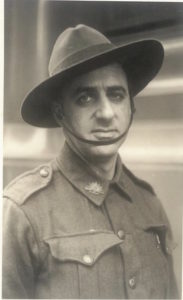 Albert Kessler was born in Balmain, Sydney on 23 December 1905. He had his Bar Mitzvah at The Great Synagogue in December 1918, the first such event there after the Armistice. (The Synagogue’s archives include a large photograph of all those attending the reception, seated at Sergeants Tea-rooms/Teahouse.)

On completing his school Leaving Certificate, he was not permitted to pursue further studies, but had to join his father, Samuel Kessler, in the family businesses, which included diamond trading and later also wool marketing.

Early in his working life, Albert acquired professional/technical qualifications/certification in gemmology and wool classing. Indeed he was one of the very early recipients of a certificate/diploma from the Gemmological Association of Australia.

In the course of looking after the family diamond interests in London, he visited Antwerp, where he met Hannah Salome van Cleef, whom he married at St John’s Wood Synagogue in 1937.

Albert Kessler was prominent and active in pre-WW2 Sydney and Australian Zionist circles, including the Union of Sydney Zionists and the pre-war Zionist Federation of Australia.

Initially he had an exemption from military service on age and other grounds, but he was soon called up and served from 1941 to 1945.

During his years of army service Albert worked in “army supplies”, at the central army stores and inventory control offices that were located at that time in what were the commandeered Grace Bros. stores in Broadway near Sydney University. Technically Albert was very adept and creative and in this period, he developed an improved gun-sight for anti-aircraft guns, to ensure that the fire was directed to where the targeted plane would be when the charge exploded.

After the war Albert was active for a while in the diamond trade, but in the early 1950s the business became impossible as a result of the imposition of punitive sales taxes on gems and the like.

In the mid-1950s Albert worked for and managed a small specialist “estapol”-type plastic floor covering product in Mascot, which was taken over in 1961 by the English conglomerate Reckitt & Colman, with which he subsequently enjoyed a pleasant, valued and recognized career for a number of years as the manager of all their “ingredients” inventory ordering and allocation/distribution systems.

After WWII Albert also became active in Jewish communal life and together with his wife Hannah (who was a prominent leader of WIZO), he was heavily involved in all the main community organizations between 1946 and 1960. Organisations he worked for included the NSW Jewish Board of Deputies, JNF, the UIA, the ZFA, State Zionist Council and Friends of the Hebrew University.

He also played important administrative roles with his bowling clubs at Bellevue Hill and Double Bay, as well as participating in tennis, golf and swimming.

Following heart problems and one of the early by-pass operations, Albert Kessler died at St Vincents Hospital on 22 July 1981.