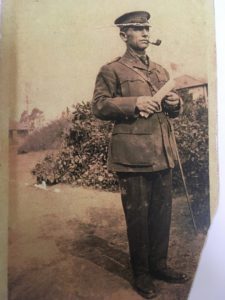 Samuel Kensell was born at Spitalfields, London in 1880, while his parents of Polish birth were actually en route emigrating from Poland to Australia.

Both he and his older brother Isaac tried to enlist in the Australian Army in 1900 to go to the Boer War, but they were rejected and both eventually paid their own way to South Africa and enlisted there.  [See Russell Stern’s article on Australian Jews who fought in the Boer War in the Jewish Historical Society Journal Vol XVI 2003 part 4.]

Samuel was a trooper in Bethune’s Mounted Infantry in 1901 with the Service Number 1560.

It is thought that some time during or just after WWI, he became a Lieutenant in the 2nd Division of the Australian Military Senior Cadets.   Then in the Commonwealth Gazette No, 24 of 1935 in Executive Minute No 95 of 1935, he was placed on the Retired List with the honorary rank of Captain with permission to wear the prescribed uniform. 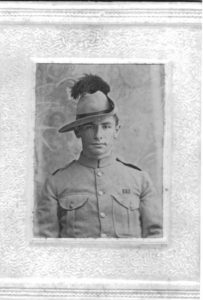 He was married three times, having a daughter & son by his first wife and a daughter & two boys by his third wife.

He was a gantry crane driver at the NSW Railways suburban railway yards at Eveleigh until he retired.

Samuel Kensell was on the executive of NAJEX in the 1930’s and was one of the NAJEX representatives of the Maccabean Hall Board and is nominated as Captain S Kensell in a number of newspaper reports representing NAJEX during that era.